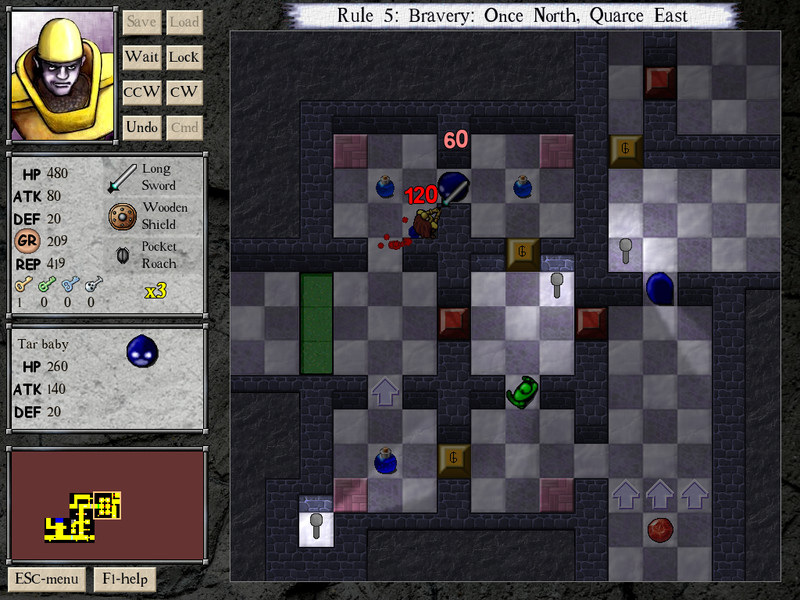 DROD RPG combines DROD's puzzle elements, strategy, world and story backdrop with player stats, weapons and armor, one-on-one monster duels, items, custom power-ups and treasure. It was inspired by the classic Tower of the Sorcerer and is similar in flavor to Desktop Dungeons.

As a puzzle/logic game, level layouts, items, enemy encounters, and treasures are all hand-crafted to bring you a series of engaging, well thought-out puzzles that are a joy to solve. Navigate through series of interlocking rooms, looking for the exit on each level. Spend hit points and resources wisely to power up and advance. Decide which pre-placed monsters to fight along the way. Battles resolve deterministically according to a clear set of rules. Get rewards from defeating enemies now or come back later when you're more powerful and can take less damage (hint: this is typically the better option).

Combining DROD's straight-forward interface and flexible puzzle widgets with the staples of dungeon crawling and resource management makes for a unique, genre-busting gaming experience. Play this game to relax and contemplate, or take advantage of its huge depth and optional elements of challenge and replayability to optimize your score against other Steam players. Along with a powerful level editor, modding capabilities and an enthusiastic player community producing novel puzzle content, this is a game you can enjoy for years.

Help Tendry, a member of the scattered Stalwart Army, escape from entrapment far beneath the surface. He might not be the ideal warrior, but he's got a lot of panache to make up for his lack in prowess. Or at least he's always good for a laugh. Keep him from killing himself in battle long enough to save his homeland of Tueno from the menacing Underground Empire. 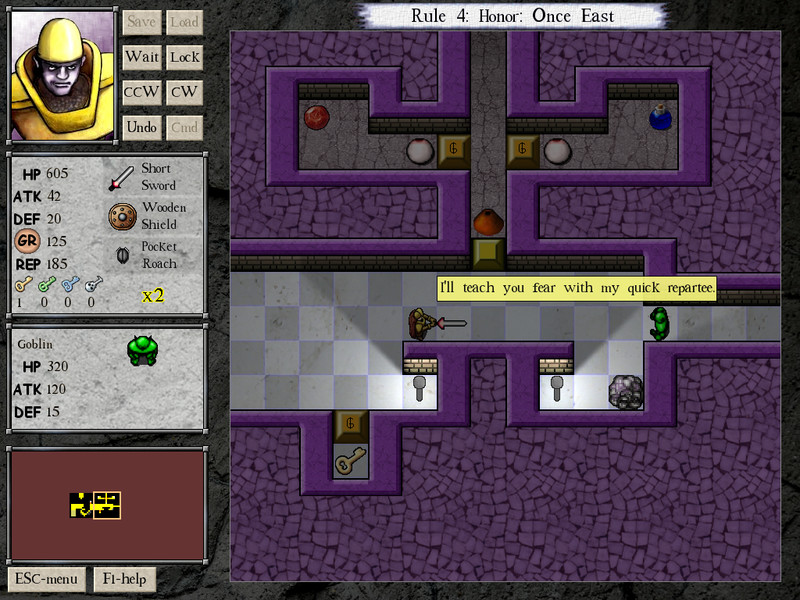 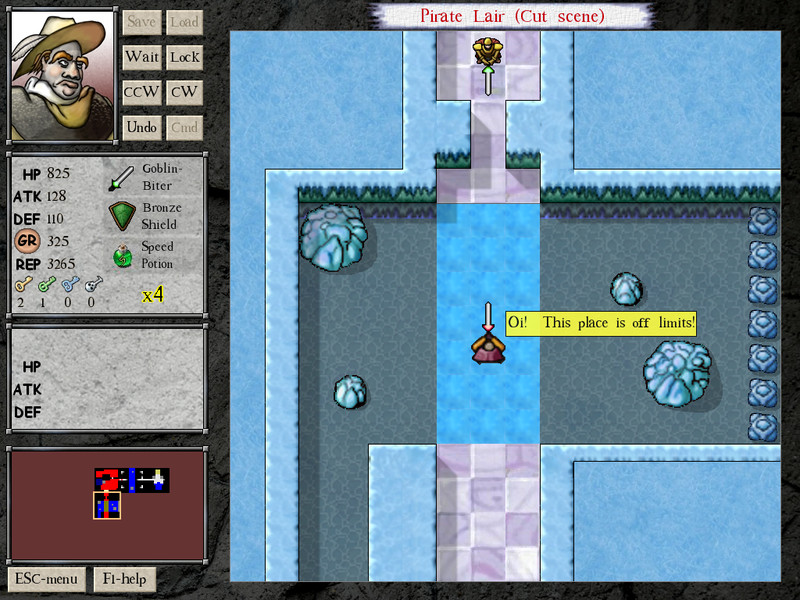 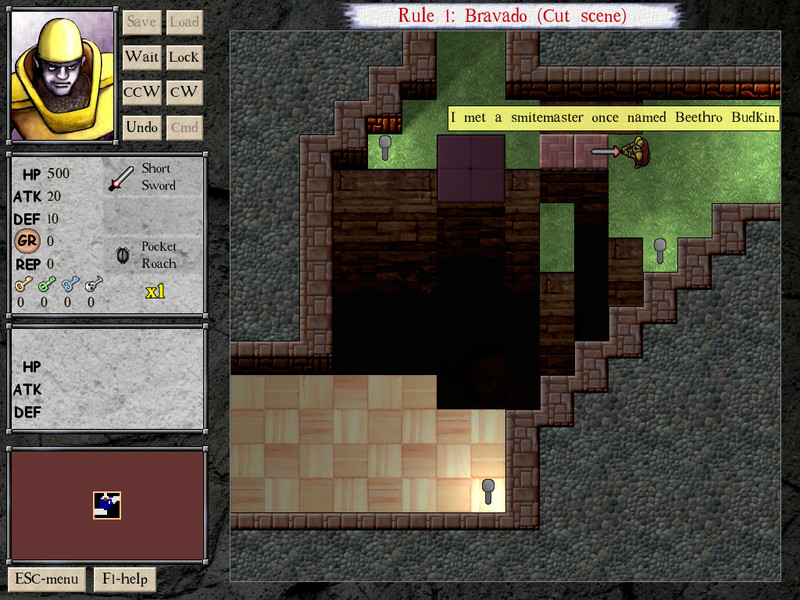 DROD RPG is not an RPG. It is better than an RPG.

In DROD RPG, you have stats, health, gear, and the like. And combat is resolved by just pitting these stats against each other, but it is still not an RPG.

For when you boil it down, every enemy has a certain amount of attack, defense, and you have the same. So knowing those stats, you know how much health you lose to fight that enemy. Thus, every enemy is essentially a door that costs health to get through.

And now you understand DROD RPG. It is a resource management puzzle game. You explore each level as much as you can, trying to plan out how to increase your stats and spend health wisely, fighting as few enemies as possible until you have found enough upgrades to render the HP costs trivial. It is a tense, careful game of you weighing your options as much as you can before you make a few moves to get some upgrades and then mop the floor mostly clean for the rest of the filthy lucre. The DROD half of the game shows up in a few gate, force arrow, and trap door puzzles here and there, and the puzzle design is quite good, though they are not the focus.

The only downside to this design is if you played poorly, you usually have to restart the entire floor. The main game is balanced such that even if you scraped by the last boss with about 3 HP remaining you can still come out ahead on the next floor, so you do not need to break out a spreadsheet to play everything super optimally, but if you screw up, you'll usually have to roll back pretty far. That's not that bad a thing; most of the time is exploration and planning. Once you know what to hit, you can redo a floor pretty quickly.

There is one fairly lengthy campaign, broken into two halves with a reset in the middle, with the second half having hugely different design from the first, almost like going from Ys 1 to Ys 2, but the basics are the same. Once you finish with that, you can download custom campaigns from the developer's website, or make your own.. Don't be fooled by the name: this game is not an RPG. It is first and foremost a puzzle game. The title isn't misleading though: DROD has become synonymous with excellency in puzzle games, and RPG means it will appeal to every fan of min-maxing or theorycrafting one can usually find in RPGs.
This is a numbers game wrapped in a pleasant interface, an original soundtrack and a deep backstory sprinkled over all the DROD games. This game is story heavy for a puzzle game, but story light for an RPG: there is no complex story to read or numerous anecdotes and side-quests. The story elements are delivered through voice acting and will make you love Tendry for is panache !
The game is best enjoyed with at least two playthroughs. Saving often and backtracking is an inherent part of the gameplay. You have to strike a balance between going forth to gain knowledge of level layout and going back to better optimize your road.
The DROD series is user content friendly and DROD RPG is no exception: if you liked the game, you can get more !

The game is a resource optimization game, where the resource to optimize is your hit points. The combat is entirely deterministic, with tooltips telling you how much HP you will lose fighting the monsters. So if you see a 15HP health potion behind a wraithwing that will take 23 health to kill, optimal strategy is to ignore it until you have better weapon and\/or ATK and\/or defense. So far so good -- but now suppose the wraithwing is guarding a door which will cost a yellow key to enter. Is it worth paying a net 7 HP plus a yellow key just to see what's on the other side? You can't tell except by trial-and-error.

In my ~1 hour of play I managed to get into a situation where I didn't have enough hitpoints to kill anything else, so game over, start from the beginning and play better this time. The intended playstyle seems to be (1) learn where the good pickups are (2) use your knowledge to plan an optimal route (3) win. But that's not the gameplay I was expecting -- to me trial-and-error is the antithesis of puzzle games and redo-from-start is the antithesis of RPG games. So a "no" from me. Play the other DRODs instead, they are pure puzzle.. You're probably going to look at this and think... uh... Rogue-like? Final Fantasy clone? There are actually very few games like this. The only one I know about that has the same type of game mechanics is an obscure game called Tower of the Sorceror. This is basically a resource-management puzzle game. You have to logically determine the best order of attacking monsters and collecting power-ups. I'm now playing through it my second time. An ingenious game to be sure, and so much thought has been put into the design. There are no reflexes required--purely turn-based--but turns are performed instantly after you press a key. So it doesn't have the slow pace of other strategy games.. DROD RPG <3. DROD RPG is a terrific and unique puzzle game revolves around the management of health, attack, keys, special one-use items, and more. Choices are obvious at first (fight a roach and take five damage or a wraith and take twenty? hmmm), but options widen with each new encounter and room, leading to a truly staggering number of choices and routes throughout the game. Each route has its advantages and disadvantage, but only a few will leave you with enough health to complete the final challenges and hardest bosses.

It can be frustrating in early stages as you learn the game's "language", that is to say the nature of tradeoffs from each decision and what it truly costs in terms of health or keys to pick up an item or leave it behind, but once you get into the swing of things it makes for an extremely intense and satisfying puzzle experience.

The base game is also split into two halves, with the first half serving partially as a tutorial but also having a completely distinct design style, resulting in both halves of the game being uniquely challenging. On top of this, there are many officially approved expansions freely available from the Caravel Games forums, some of which have even more sadistically precise challenges than the main campaign.. This is a game where you have to use your noggin' to make choices.

If you enjoy using judgement and logic to conserve resources effectively, this is a game you will enjoy.

If you enjoy optimizing mathematical puzzles under the veil of stat-based RPG, this is a game you will enjoy.

This game is like a grid based dungeon crawler, not totally unlike Desktop Dungeons (except not random at all), or Legend of Grimrock (except completely turn-based, with no reflexes required). It's obvious inspiration is Tower of the Sorcerer. You find stuff, stab baddies like goblins and evil brains with a big pointy sword, get stronger, and try to make to the end alive. It's brimming with secrets and you are generally rewarded for not acting rashly, despite the personality of the protagonist.

If you have heard of DROD before, be warned that this game is utterly unlike most entires into the DROD franchise. It's a puzzle game of a different sort, but that's not a bad thing. Less pure logic and more judicial logic. It's a slow burner, but a good game, and it's pretty cheap for how long it'll take you to make it to the end alive. Give it a shot!. DROD RPG is probably my favorite installment of the DROD series. It is technically an RPG game but could be more appropriately thought of as a gigantic optimisation puzzle. involving intense micromanagement of the usual stats like health, attack power and defence power. If you manage to finish the main campaign, the Caravel Forum contain many more user-created levels you can download, most of which are terribly, terribly difficult. I prefer to play the game using a spreadsheet so I can calculate the optimal path as best as I can.
I can guarantee that this game will not appeal to everyone, but it is absolute crack to fans of complex puzzle-solving!

(Ignore the steam stats, I played this game for countless hours before its steam release.). I loved all the DROD puzzle games, but this is a single puzzle spread over multiple levels and hours of play where your first attempts will likely end in unwinnable states requiring a complete restart. Playing correctly requires foreknowlege of the levels. For someone who hates repetition, this is a crime against game design.. Worthwhile game offering what it says on the tin, not going to blow your socks of but want some challenge and brain training then worth the price
https:\/\/youtu.be\/i2RoOLMzVZ4<\/a>